The Amazon Rainforest Is On Fire 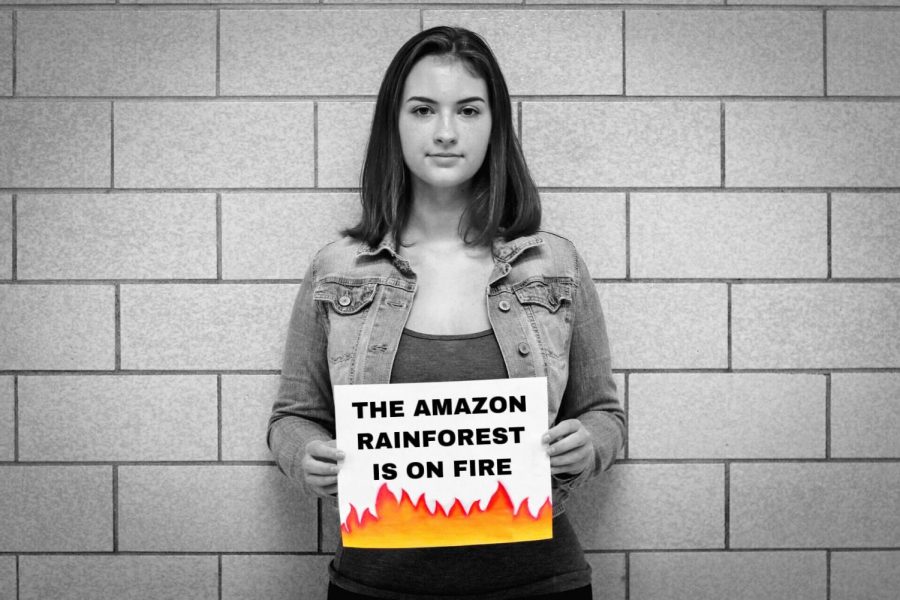 Expressing her passion of protecting the Amazon Rainforest, sophomore Molly Phelps holds up sign to spread awareness of the fire. She believes something should be done to protect the species native in the rainforest. "Many of the animals will die and biodiversity will decrease rapidly," said Phelps.

The lungs of the Earth are on fire.

The Amazon Rainforest, which produces twenty percent of the Earth’s oxygen, has been burning for the past month.

Not only does the Amazon play a large role in the oxygen cycle, but it also has the most diverse ecosystems in the world. With the curiosity of how the fire started, there have been recent accusations going around that the President of Brazil Jair Bolsonaro gave organizations permission to start the fire. Students and residents of our community have been spreading awareness and speaking out about the fire.

The Amazon fire has been concerning due to the fact that it is home to 10 percent of the world’s species. “In the Amazon, nothing is adapted to fire,” William Magnusson, a researcher specializing in biodiversity, told National Geographic.

“Loss of plant and species are a tragedy and I’m sure there are rare plants being consumed every day. Many of those plants may contain cures for many of our most debilitating diseases and that is sad. So we need to put the fires out as quickly as possible,” said social studies teacher Monty Edwards.

The cause of the fire is still unsure, but Bolsonaro has claimed without evidence that the fire was started by non-governmental organizations, and later claimed he never accused them according to BBC. However, recent conspiracies have been flooding around Bolsonaro that he gave permission to organizations to start the fire due to him supporting deforestation, logging, and farming.

“They don’t want us to speak because we’ll say the truth, that conservation areas are being invaded and destroyed, there are many people marking out areas that should be protected,” an anonymous Senior Official told BBC.

News publishers have also been suspicious of Bolsonaro starting the fire due to the fact that he at first rejected the G7’s $20 million of foreign aid.

Some people think that the fire was caused due to the dry season and global warming. Others think that it is a phase that the Earth is going through.

“It may not be normal to man given our relatively short time on the planet, but it is probably a cycle that has been repeated over and over again in the earth’s history. The Earth is a resilient planet and it goes through cycles,” said Edwards.

While the Amazon fire has been one of the top stories recently, a couple of weeks ago there was little to no coverage about the fire until a photo and hashtags spread rapidly around social media. A large number of students and community residents posted the photo to their Instagram stories and various other forms of social media.

The post stated, “The Amazon has been burning for three weeks, and I’m just now finding out because of the lack of media coverage. This is one of the most important ecosystems on Earth. Spread awareness.”
On twitter, #ActForTheAmazon, #PrayforAmazonas, and #AmazonRainforest have been trending to help spread the news and awareness of the fire.

Many students have spoken out about the Amazon fire. “This will affect the endangered species there and biodiversity will decrease rapidly throwing the whole environment off balance. People in Mt. Washington can simply help by donating to the Amazon rainforest fire relief and spreading awareness of the damage taking place within the deforestation of the Amazon,” said sophomore, Molly Phelps.

Some organizations that people can donate to that fund conservation and protection of the Amazon Rainforest are Rainforest Action Network, Rainforest Trust, Amazon Watch, Amazon Conservation Team, and The World Wide Fund for Nature.