The Bullitt East Bowling Team Gets Spot In The State Tournament 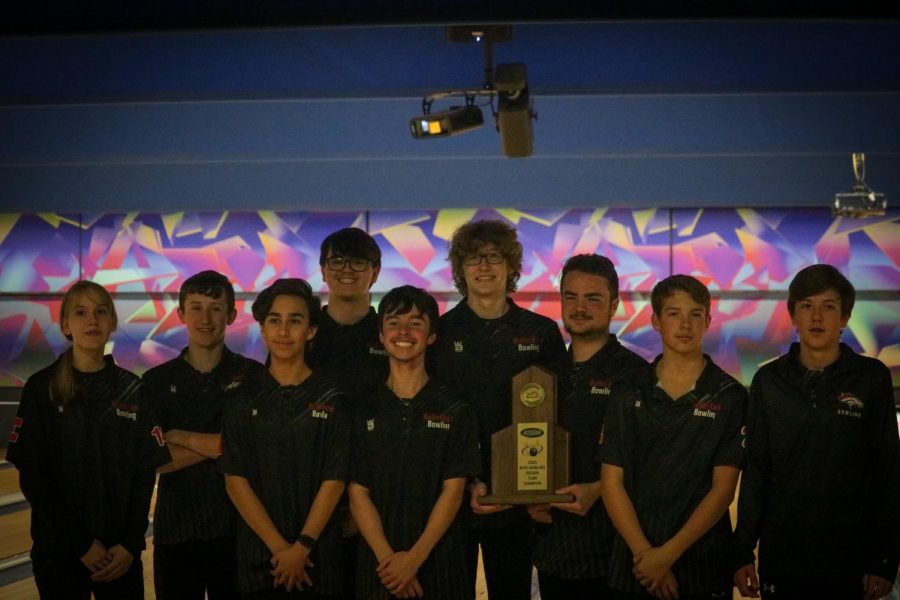 The team of bowlers that bowled at the Regionals tournament. Jan. 27, the Regionals tournament for bowling was held, and after facing off against Doss High School, DeSales High School, Fairdale High School and finally North Bullitt High School, Bullitt East was declared the champion. “So, we did get it going against Doss. Kids were a little tight against DeSales, but man, they took care of business, and once we did that, I felt like we had a really good chance to qualify for the state tournament, and win the region. Fairdale gave us everything that we could handle, but we just came out on top, by just a little, and then North Bullitt, we had pretty well handled them this season, and I feel like our confidence was very high, against them,” said bowling coach Lenny Raley, “Dylan (Young), all season long, has just been the anchor, and I call him, ‘The ice-man,’ because he has ice in his veins, and it doesn’t affect him. You know, he’s just solid; ice is solid, and he is solid. So, I’m just smiling thinking about it, and I’m very happy for our kids.”

You could hear the cheering for the bowling team from as far away as the sun.

The champion of the main regionals tournament, that determines whether you’ll go to state as a team, or not, ended with a win.

Before the tournament actually started, each person bowled their own game. Senior Logan Parrish, and bowling coach Lenny Raley, believe that they weren’t doing the best, during those qualifying games. “I would say it (the overall regionals tournament) went pretty well, considering we won after a not so good round, of our individual games,” said Parrish, “We didn’t have a lot of high games and our qualifying games weren’t our best, so score wise, we didn’t have many highlights. The thing that stands out most to me was Adams big split conversion in one of our matches.” Junior Adam Young scored a 147, freshman Katie Olds scored a 140, freshman David Scholtz scored a 120, senior Dylan Young scored a 199, sophomore Austin Hale scored a 146, freshman Austin Graham scored a 110, junior Gavin Coffman scored a 148 and Parrish scored a 148.

With the information that they got from these games, their first elimination match was placed against Doss High School with three wins in a row. Their first score was a 170-93, their second score was a 168-152 and their third score was a 143-119. With us getting these types of scores, the second and next elimination match was against DeSales High School. “The first bakers game was against Doss. We took care of that fairly easily, and then low-and-behold, we go up against the number one team in the region, DeSales,” said Raley.

With the information that they got from these games, their third elimination match was placed against Fairdale High School with a tie, two wins and a roll off. The first game was the score of a tie, with a 158-158, Fairdale won the second game with a score of 159-137, Fairdale won the third game with a score of 159-137, our team won the fourth game with a 209-172, our team won the fifth game with a 203-169 and their final thing was a roll-off (which is the last two frames, of a normal game, bowled by the ninth and tenth frame bowler) and we won with a score of 40 (plus a strike) to 20 (plus a strike). “Went up against Fairdale; the first game was a tie, so it washed out. They won two; we won two. So, it’s two to two, and the rule is, the ninth and tenth frame bowlers have to go head-to-head and I felt very good, because we had Logan Parrish, and Dylan Young for us, and they took care of business to put us into the finals against North Bullitt,” said Raley.

With the team  winning that elimination match, the team was ready for the championship, against North Bullitt High School. Their first score was a 177-146, their second score was a 192-158 and their third score was a 163-148. “Well, I’d say it went really successful. I mean, considering we had to bowl our butts out from the very bottom all the way to the top,” said Dylan Young, “Our team did outstanding. Like, seriously, we just came up from the bottom. We came up, and won first place in our region, for our team. It’s crazy.”

After the win against Fairdale High School, and North Bullitt’s win against Pleasure Ridge Park High School, both teams were for sure going to the state tournament. “We’ve had an awesome year; we’ve bowled a 300 baker game. So, we’re capable. You know, we’ll see the marks going into the tournament, but it’ll be the same deal. We have to take care of ourselves. We can’t worry about anybody else. And if you just take care of yourself, that’s all you can do, and the numbers will take care of itself. And so, I’m anxious, and looking forward to it. You know, like I said, it’s a brand new experience, and first time for our bowling team, to win the regions. So, very exciting night, for that group of kids,” said Raley.

Young is ready for the state tournament, and he thinks that it will go good. “I think it will go pretty good, because I mean, I know it’s going to be the top teams in everyone’s region. I think we could still do it, if we keep pushing, and keep going,” said D. Young.

Parrish, like Young and Raley, believes that the state tournament will go pretty well, and he believes that we can make some noise. “I think it will go pretty good, because I mean, I know it’s going to be the top teams in everyone’s region. I think we could still do it, if we keep pushing, and keep going,” said Parrish.

The fans of the team are all kind of a quiet team, but all were loud the night of the regionals tournament. “All of our families were amazing standing back there. We’ve never been a loud team when it comes to cheering, but they were extremely loud, and it was great to hear,” said Parrish.

Raley understands that we are quiet, but he is glad that the fans were loud that night. Although, some of the other teams, are louder, but that is just their team naturally. “Some of these teams fans, are just crazy, and our kids; they’re pretty low-key. I mean, I’m a pretty excitable guy, but today, I just try to keep it steady emotions; not too high, not too low. Some teams around us were yelling, and screaming, and just out of control, but I guess that’s what happens. Our fans were very much into it; the people that were here, supporting us. But the best thing is, our kids kept their composure; they didn’t get rattled. I’m just telling you, it’s hard to concentrate, when there’s all that screaming going on,” said Raley.

Young is very happy that he got to be the best bowler, from the team, in the region tournament. He is also very happy with how the past four years went, with him being on the bowling team. “Bowling-anchor is not easy. Especially you can vouch for that, but like, it may look easy to you, but like when I’m up there; especially when we bowled that 300, it’s just shaking. It’s just like you can’t stop. You just got to learn to calm yourself down, and just overcome it, and just keep going. Going with the flow,” said D. Young, “Yeah, I’m more than happy (with how he’s done the past four years). Like, seriously, words just can’t describe it dude. Literally started from the bottom, and now we’re at the top.”

Parrish is very happy that he got to be the second best bowler, from the team, in the region tournament, but it also is a little “nerve-wracking.” Parrish is also very happy with how the past two years went, with him being on the bowling team. “It was cool, but also extremely nerve racking. I had a roll off with Dylan to win a match and I was pretty nervous about it,” said Parrish, “I’ve actually only been on this team for two years, but yeah, I’d say I’m happy with them. I’ve improved a lot from last year, and so has our whole team.”