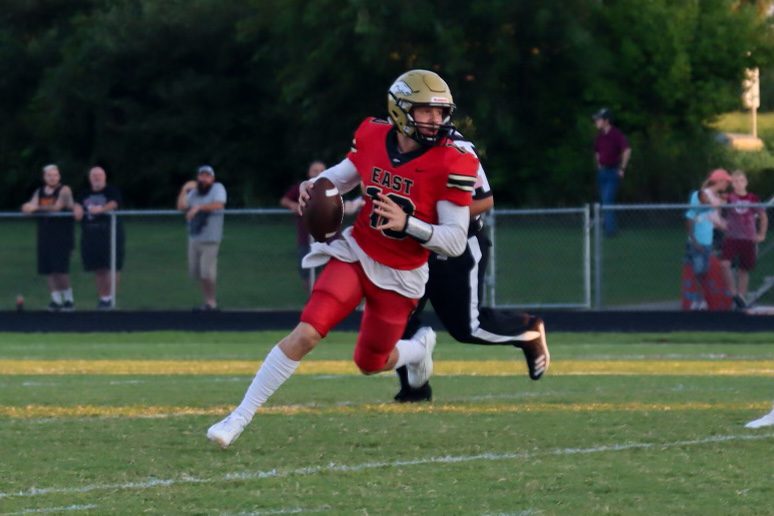 Junior Travis Egan running a play during the Bullitt Cup. Sept. 17, Bullitt East faced Bullitt Central for the Bullitt Cup, and came out with a win, 76-39. ¨ I don't know that you could really say that it's a rivalry at this point, I believe for the past couple of years it's been a substantial win for us here at Bullitt East,¨ said linebacker coach Tolliver Hefner.

The fight for the Bullitt cup was an easy win for Bullitt East.

The Chargers started off this week by practicing hard and it paid off by winning the Bullitt Cup Sept. 17 against Bullitt Central. There were lots of great plays by juniors Travis Egan, Mason Gauthier, Nolan Davenport and Camron Brogan.

The game had a large fan section, both sides went all out in gold and white. The Red Zone decked out in gold from head to toe as well as Bullitt Central, but in white. ¨The energy really good over there everyone’s cheering,¨ sophomore Maddie Miller said.

For more than 15 years, Bullitt Central and Bullitt East have been butting heads for the Bullitt Cup. North Bullitt has always been a team that never had the best athletic standpoint but Sept. 3, the Chargers won 56-14. ¨I don’t know that you could really say that it’s a rivalry at this point, I believe for the past couple of years it’s been a substantial win for us here at Bullitt East,¨ linebacker coach Tolliver Hefner said.