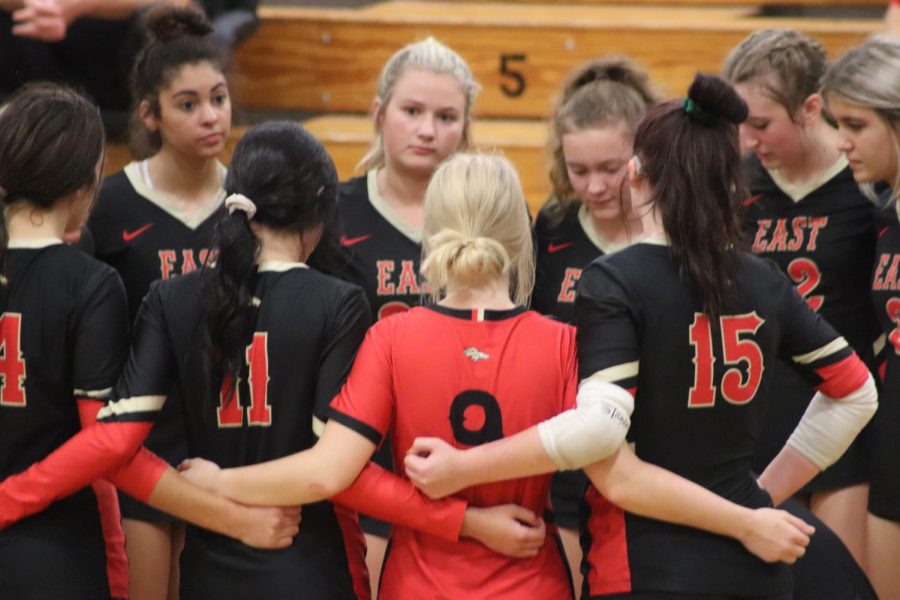 Bullitt East in a huddle as they play against Whitefield. They won 3-1 after losing the first set and were 24 District Runner-Ups. "Having Whitefield as the first round of districts had us a little nervous at first going in because we had gone five with them in the middle of the season but as soon as the game started I think we all knew we had it. We set a goal for ourselves after losing the first game that we would beat them out the next three and we did that, senior Mckenna Humphrey said.

The volleyball team had their district tournament last week.

They started the tournament off against Whitefield Academy at Jeffersontown Oct. 18. They started off slow and lost the first set 25-20. The Chargers came back strong after a good start to the set and won the set 25-17. They won the third set 25-18 after a strong performance by junior Hayla Puckett. They finished the game off with a 25-16 set to advance to the 24 District Championship game against Mercy.

After starting later than they intended, the team was able to finish the first round of districts strong. They fell short in the first set as Whitefield won but were able to win the next three sets against Whitefield “I felt really confident about this game and I feel as if we played a solid game and came out on top,” Puckett said.

The 24 District Championship game was played against Mercy at Jeffersontown Oct. 19. They had a slow start with Mercy winning the first set 25-14. It continued over the next set with Mercy also winning 25-18. Even with comeback efforts, the team couldn’t get back in the game with Mercy finishing off winning 25-17 and winning the 24 District Championship. “Even though we lost, I am still proud of our effort as a team and I think we played hard,” Puckett said.

They will continue their season as they enter the Sixth Region against Holy Cross (Louisville) at Holy Cross Oct. 25th at 6 p.m.