Robison and Bryan Are Headed To State 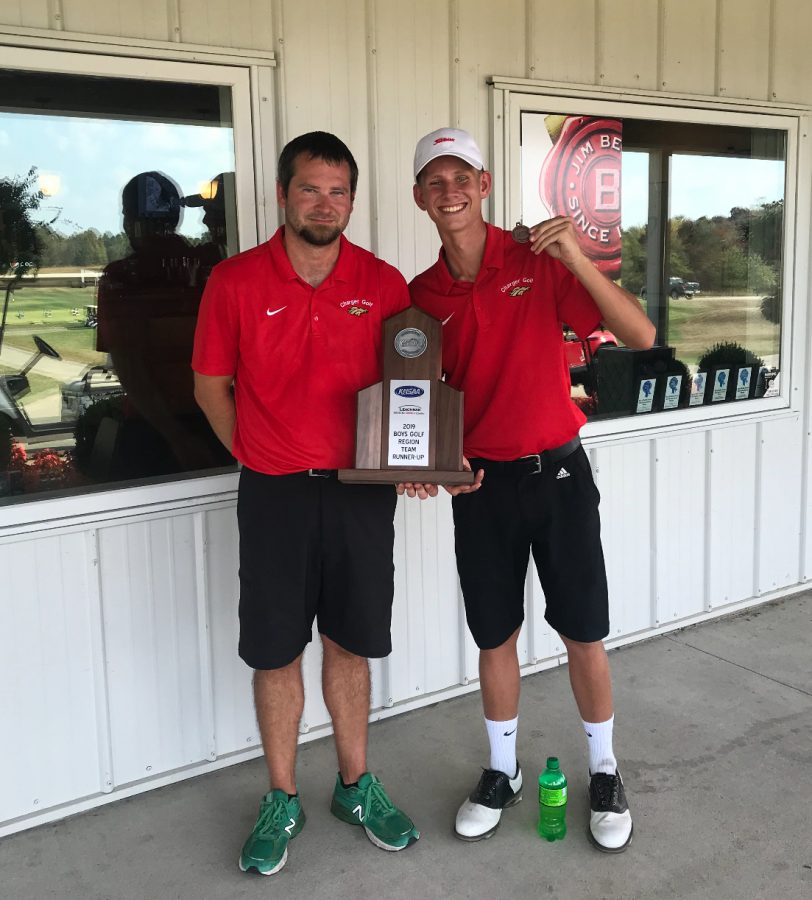 Coach Kyle Downs and senior Aiden Robison holding trophy of second place from regionals. The boys golf team placed second at regionals on Oct. 1, against 12 other teams, and Robison and junior Thomas Bryan earned a spot in the state tournament. “Thomas and I are going to get prepared for state by playing a ton. We want to show the state that Bullitt East has some great golfers,” said Robison.

Two members of the boys golf team are headed to state in a few days.

The correct expectations were set by the team before they even found out what happened. Regionals served as a match to remember for the team because of their good results. The players that will be playing in state have different areas they need to improve on.

Most of the teams players had hope that anyone of the team members could possibly go to state. “I know that some of us will go to state, we’re fully capable,” said senior Aiden Robison, “We just need to buckle down.”

With junior Thomas Bryan scoring only five over par, in which the par was 72, the team was pretty positive that Bryan was going to be able to compete for the state. “I could have played better, but I should be safe for state,” said Bryan, “I played pretty decent.”

Although, with Robison scoring the second-best of the team with only eight over par, they thought he could also possibly go to state as well. “Right now, for this season, we got Thomas at 77, and Aiden at 80. They both might get in,” said Kyle Downs, the coach of the team.

It wasn’t just the coach that thought it was possible for both to make it to state period. “I feel like Thomas and Aiden should go to state, because Aiden shot in the 80’s and Thomas shot in the 70’s. So I feel like they have the potential to go to state,” said freshman, Kyle Schuler.

Robison almost had to redo his holes again, because he tied with another player, and they were going to have them go against each other. It didn’t end up happening, though, because they sorted something out, to where the two players didn’t have to go around the whole golf course again. They also kept their original scores of 80 strokes. “There was no playoff, I thought there would be, but I made it in on the number,” said Robison.

On the day of regionals, Oct. 1, at the Heritage Hills Golf Course, Bryan led the team with a score of 77 strokes. Following behind was Robison with a score of 80 strokes, junior Gavin Koffman with the score of 90 strokes, sophomore Austin Hale with a score of 94 strokes, and then Schuler with a score of 96 strokes. They started off by doing holes 10 through 18 and then followed up with holes 1 through 9. They placed second, with LaRue County beating them by 24 strokes. “I’m very happy with the team, but I would’ve liked the team to win. Second is good, don’t get me wrong, but winning is always better,” said Robison.

The temperature was about 98 degrees fahrenheit. “We knew it coming in, it was going to be hot. We planned for that. We got lucky and got a really good time, and so that kind of helped us, but no, heat wasn’t a problem, heat wasn’t an issue, we were very good,” said Downs.

A few players actually thought that heat helped them a bit. “I honestly think I played better, because the fairways were dryer, so it was easier to get out of. The greens were faster and easier to putt on,” said Hale, “The light green grass, is really short, and that’s the fairway.” On the other hand, Schuler thought it was exhausting, but he knew we could power through, like the rest of the players.

They all came to the agreement that the reason they did so well today, was because of hydration. “The heat makes us tired, I drank 13 bottles of water. It’s hard to keep going at a good pace when it’s so hot. It wears you down,” said Robison.

Bryan and Robison, soon after the game, found out that they would be headed to state, because of Bryan placing third and Robison placing seventh out of everyone. The others to make it to state were: Allan Lockwood, Andrew Bennett, Noah Cruze, Grant Manion, and all of Larue County (Tanner Lasley, Chase Childress, Carson Childress, Chandler McLaughlin, and JT Holcomb). “I wasn’t surprised that I went to state. I knew if I did what I was supposed to then I’d be okay,” said Robison.

Four out of the five of the players thought they could personally improve in some way. “I could’ve done better like I could have shot 40. (Jokingly said the ‘40’ part, because the par was 72.),” said Koffman. Koffman believes the team can work on putting.

Robison, Schuler, and Hale all agree that the team, for seasons to come, need to work on not getting so mad or serious, and just trying to have a good time. “I feel like everybody takes it really seriously when we go out, but the thing is, whenever we go out and just have fun, everyone does so much better,” said Robison.

Robison also has goals for himself where he can improve for state, and realizes when he could have done better. “I was unhappy with how I played, I did really well the first nine, but then fell apart a little bit. I still was able to go to state, though, which is a great accomplishment,” said Robison. Bryan believes he needs to work on his irons clubs hitting to be ready for state. An iron club is a club that is used for the middle fairway shots.

As of right now, the state tournament’s time and date has not been announced.