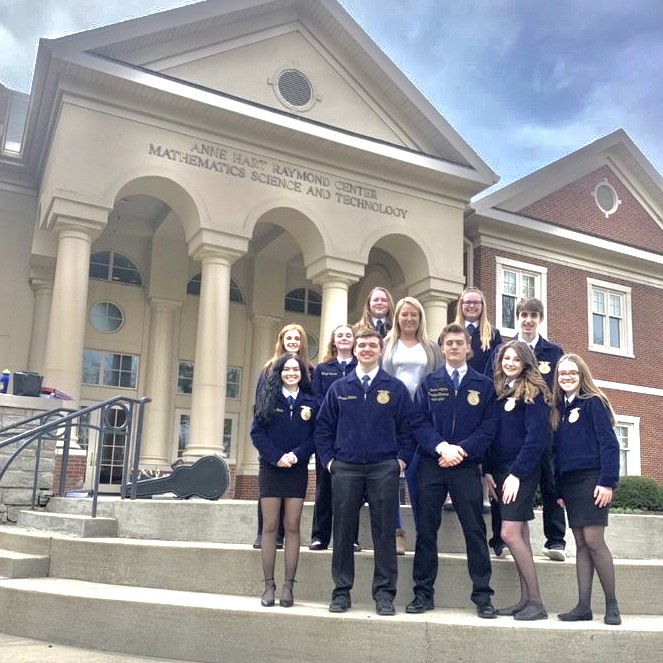 Bullitt East FFA members will be moving up in the competition.

The chapter competed at Capital City Regional Day. They had two members take home wins and multiple members placed with high rankings. The members who placed within the top three will be moving on to compete at state.

The chapter traveled to Midway University Thursday, March 5 to compete at Regional Day. They competed against 14 chapters. The officer team all competed in impromptu, sophomore Trinity Smith competed in talent, and freshman Jackson Gentry competed in creed speaking. “I was hoping that our students would be successful at regional day this year. Last year, after a lot of preparation, our scores were not phenomenal and I was very discouraged. I wondered how we can be working this hard and not getting results. This year, I wanted to send at least one kid to state. When I saw the results, I was thrilled that we would be sending two and I was proud of all of my students and their rankings,” said FFA Advisor Megan McConnell.

Smith ended up placing first in talent singing and playing the guitar to “Amarillo Sky,” by Jason Aldean. Sophomore Emma Whitehouse placed second in poultry impromptu. “I was really excited and proud of myself, but will not be able to attend because I have a world archery tournament but am still just as happy,” said Smith.

Smith and Whitehouse will be advancing on to compete at state during Kentucky’s State Convention during the summer. Along with their wins, multiple members received high rankings in impromptu. “I always tell my students that even if they fall on their face giving a speech, it’s still preparing them for the next time that they have to get up and speak publicly. They are getting stronger each time that they get up in front of an audience. Impromptu speaking is out of many students comfort zones because it takes a lot of preparation and students do not have a script in front of them to memorize. They ultimately become better speakers and develop the ability to think on their feet through public speaking,” said McConnell.