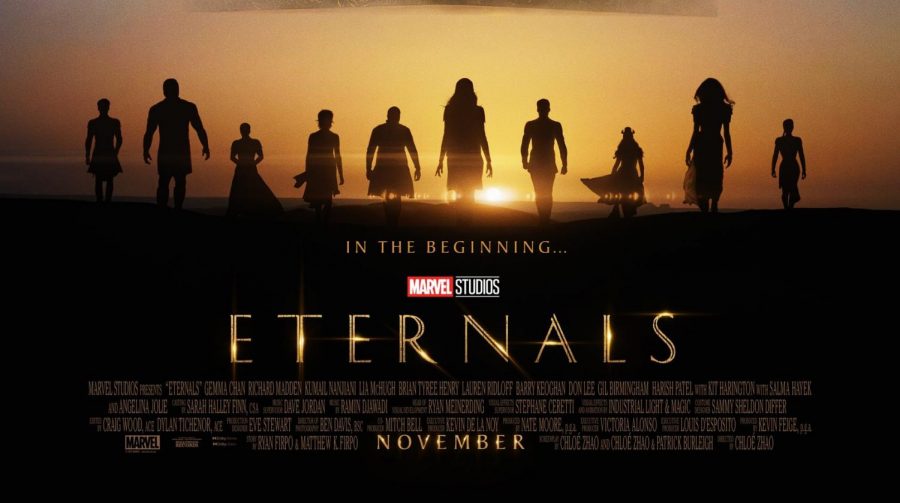 Changing representation in media for eternity.

A new group of superheroes enters into the Marvel Cinematic Universe (MCU) in the newest movie, “Eternals”.

The MCU released its latest movie, “Eternals,” Nov. 5, 2021 which is a movie that includes a very diverse cast, including more people of color and even the first fully deaf superhero. Marvel has been focusing on adding more representation into their latest films after “Shang-Chi and the Legend of the Ten Rings”, the MCU’s first Asian-led superhero movie. Many more projects for Marvel have been set up, introducing more characters and what’s going to happen next in the universe.

Marvel has started to release movies and television shows more frequently starting with “Shang-Chi” and “Eternals”. “Eternals” was the latest movie Marvel released and features well-known actors such as Angelina Jolie and Gemma Chan playing characters that aren’t as well known. When the characters were first introduced, people didn’t know the characters well because the first comics introducing them were released in 1940 followed by a more popular miniseries in 2006. The MCU is now taking these characters to introduce them into the new phase and eventually build up into more movies and plots.

The MCU has been focusing on adding more representation into their universe which was successful with the movie “Shang-Chi and the Legend of the Ten Rings” starring the first main Asian Marvel superhero. In “Eternals”, Marvel has added their first fully deaf superhero, Makkari, played by deaf actress Lauren Ridloff. With Marvel’s newest projects, more deaf representation has been added after Makkari. Characters in the new Hawkeye series, such as, the newest villain, Echo, and also Hawkeye himself, making him accurate to his comic book character. Adding these characters along with the first fully gay character played by Brian Tyree Henry and more people of color has been positive towards the younger generation of viewers and bring comic accuracy to the films.

After the events from the movies “Avengers: Infinity War” and “Avengers: Endgame”, they ended the first three phases of the MCU with solo movies for select characters leading up to the plot for both movies. Now the MCU is entering its phase four of movies and shows including “Eternals” as one of the many released and announced projects. Other movies and shows such as “Hawkeye” and “Spider-Man: No Way Home” have been announced and are being released soon to continue the build-up of the next couple of phases for the MCU.