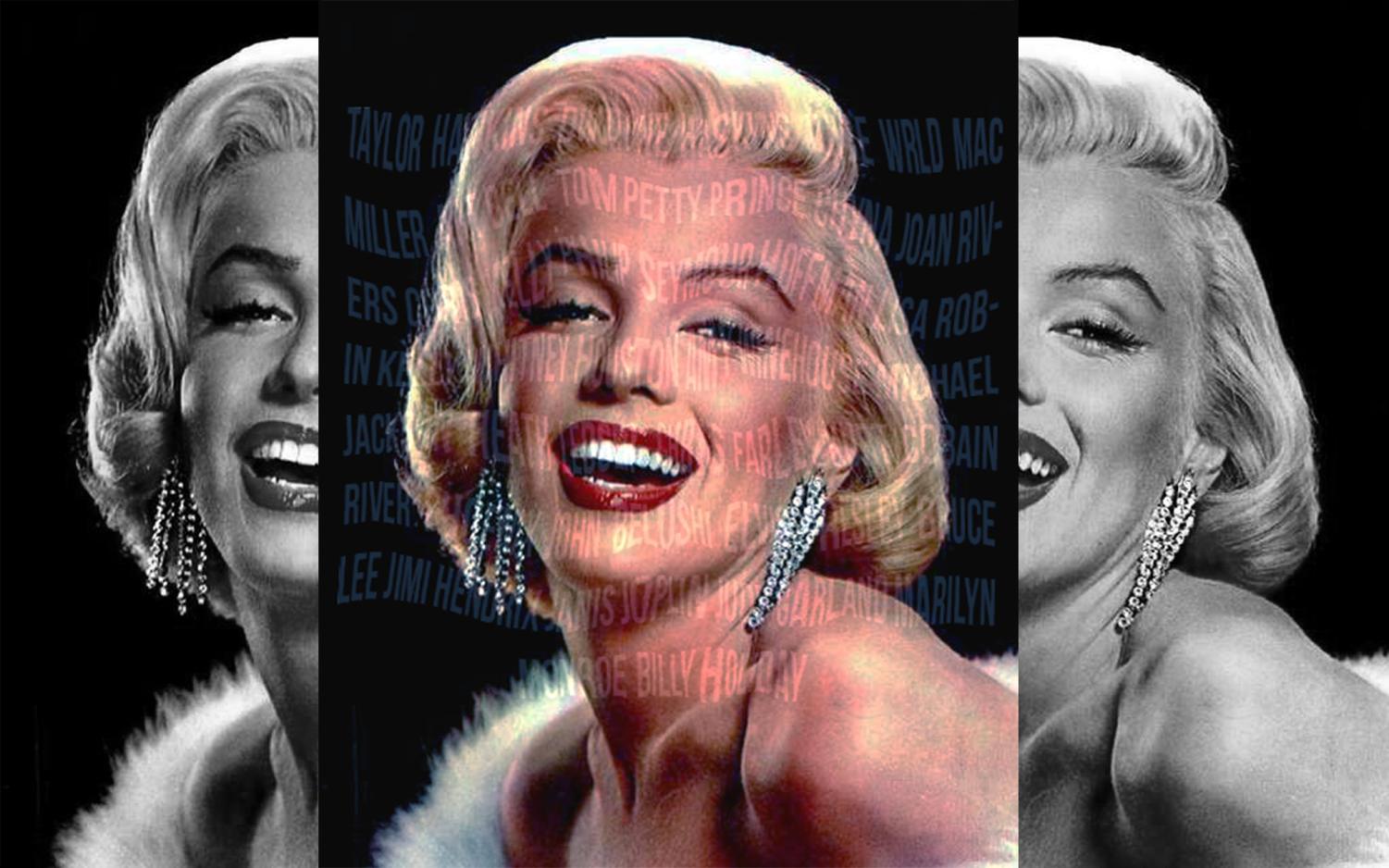 Hollywood legend Marilyn Monroe, a victim of Substance Use Disorder.

The Drug-Related Deaths of Today and Yesterday

The common escape route from fame taken by celebrities under pressure is drugs, killing the famous legends of the past, and continuing to take out stars today.

Being in the spotlight of fame is a hard burden to bear, leaving many household names on drugs, ultimately causing their death. This issue has not only been present in the past, but it’s ongoing and seen with loved ones of today. The situation is reflected in our average neighbors as well, affecting and killing not only the celebrities of society.

About 66 years ago in 1956, Elvis Presley dominated the charts and was a living legend dubbed “The King of Rock and Roll”. Behind the fame, Presley was a victim of prescription addictions, abusing barbiturates, antihistamines, tranquilizers, Quaaludes, laxatives, sleeping pills, etc. This blend of drugs was the recipe for early death. “That’s a high-risk profession for substance use, and they should be mindful of how many of these entertainers that we’ve lost. Number one, and yes, number one was Elvis Presley.” Bullitt Opioid Addiction Team founder, Jennifer Stepp said. Outside factors, including those responsible for Presley’s health, also contributed to his death.

George Nichopoulos, Presley’s physician, felt it was his duty to supply his patient with what he wanted, or asked for, which in the case of keeping someone alive, is risky. He had claimed himself to be Presley’s father, best friend, and doctor. This bond between doctor and patient can bring a sense of informality to the office, and make it harder for Nichopoulos to say no. “I do believe that this could have been prevented if he was struggling with the problem this time and day. Back then addiction problems weren’t talked about as much and people had to struggle with these problems all alone,” sophomore in the nursing pathway, Lexi Branum said.

There have been many other famous cases of these relationships between celebrities and doctors years after Presley. Michael Jackson was addicted to Propofol with the assistance of his doctor Conrad Murray, the one blamed by the public for Jackson’s death. “They are putting people at risk. Doctors have to take an oath when they graduate or whenever they are going to practice and the oath says something like ‘first do no harm’. And they will be actually doing harm to people at risk giving them special treatment and giving them whatever drugs they want,” Stepp said.

After Jackson suffered scalp burns from a stage malfunction in 1984, he started taking painkillers, which led to his addiction to much larger drugs such as Oxycontin, Demerol and Xanax. While his addiction to Propofol was a concern and should’ve faced intervention, it was instead fueled by Murray who often gave in to Jackson’s pleas for more drugs. Jackson was given his last, large dose of Propofol at the hands of Murray, ending his life on June 25th, 2009. “I think that the doctor should treat the celebrity just like a normal person. They shouldn’t give them extra care or extra medication because of their fame,” Branum said.

Looking back further in the past, old Hollywood was the center of problematic lifestyles. When it came to money and film culture, it always came back to drugs. Marilyn Monroe, an icon of the 50s and 60s and one of the most admired women in history, struggled while taking sedatives, tranquilizers, amphetamines and other harmful pills. Her addictions to such and her alcohol dependence took a toll on her physically, emotionally and energetically. After the “Candle in the Wind”, as Elton John referred to Monroe, passed from a sleeping pill overdose, the public felt that there was no one to blame but the pills. The pills were given to Monroe by her doctor, Hyman Engelberg, two or three days before her death which was considered suicide by many. “I feel so much sorrow for people that are suffering with addiction and the stigma that they’re under way back when. There was no help for anybody,” Stepp said.

“Celebrities might turn to drugs because they feel this pressure to be perfect and it can get stressful. They try to look for quick solutions to these problems and resort to drugs,” Branum said. The reason for Monroe’s resort to drugs was simple. She was in the constant spotlight and was expected to exceed what the public eye demanded of her.

There have been many occurrences where drugs were used to enhance efficiency in productions or movies as seen in the life of past Hollywood star Judy Garland. Garland was exposed to the dark side of Hollywood at the early age of 10 when she was constantly drugged with stimulants and force-fed sleeping pills.

At the age of 16, Garland was a part of the MGM classic, “The Wizard of Oz”, and was extremely dependent on drugs such as amphetamines and barbiturates to stay in shape and have enough energy for filming. The strict diet and drug usage that came with the making of the movie were a big burden to carry, along with the pressure of meeting the film’s expectations. Garland in later years remained haunted by the memory of working on set and was still hooked on drugs after the damage from making the film. Garland died at 47 by accidental barbiturate overdose. “Dorothy from The Wizard of Oz…she was under such pressure to remain thin. Yeah, she was thin and they kept telling her she kept having to lose weight and stuff like that. She was under such pressure. Everybody was on her to meet such standards and if she didn’t meet that, they were just gonna bring in the next person that can do it. It’s like they’re just a number and I think that’s why they resort to drugs,” Stepp said.

While all of these cases have passed, the presented issue is still ongoing and did not disappear over the decades. Current celebrities of today are vocal about their struggles with abuse and are living examples that recovery is possible. “One celebrity’s story that I have heard several times before that struggled with addiction is Robert Downey Jr. He was introduced to substances before he was a teenager. His story is really inspiring for me and helps me better understand what people with addictions go through,” Branum said. Other famous faces in more recent years include American Rapper Mac Miller who died early at age 26 from an accidental overdose of fentanyl and cocaine. “I think everyone should be aware of how those in the entertainment industry are affected by substance use and be considerate of that,” Stepp said.

Today we have people to look towards in the world of the famous such as Britney Spears, Demi Lovato and Elton John, who have all overcome addiction and shown that recovery is possible not only in celebrities but average people the ongoing issue strikes every day.

Over 109,000 people in the United States have died of an overdose in 12 months ending the March of this year. This affects the average population as well; Those who are more often judged when it comes to addiction. “I feel like people will stigmatize the average person with addiction and talk about them terribly like they’re a junkie and terrible things. And then they will turn a blind eye to celebrities, and they will enable them and they will keep on going,” Stepp said. Stepp revealed that the first step to recovery is the contemplative stage. “For the drugs out today, you got to force people into that area of change sooner, so they don’t die. And that’s why there are things out there called Casey’s Law where you can get someone court-ordered into treatment and get them to recognize their problem before it’s too late. So that’s the first step. You got to get people to help,” Stepp said. After this, comes treatment and recovery. “You got to get people to treatment first. You got to get them to detox. You got to get them to stabilize. And you got to get them medication if that’s what they need. And there are several medications to treat Substance Use Disorder these days,” Stepp said. It is possible to seek and receive medical assistance in cases of addiction, and it is possible to overcome substance abuse. More recognition has come to this subject over the years, allowing more awareness to spread of such subjects that have been relevant for decades.